Today, at this moment (September 28th, noon Pacific Time), a NEW Rise of the Beasts release will drop via the LittleRubberGuys Store. And it´ll not be regular release but a GITD (Glow In The Dark) version release and not in just one color but in two colors! What a great moment for a GITD drop, with the Halloween period ahead, and of course it´s awesome to see another release of these little fellows again after a long period of ¨silence¨. 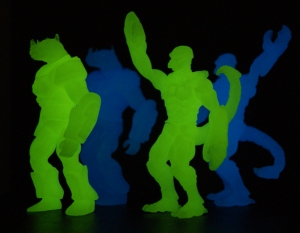 GITD Rise of the Beasts Set
A set consists out of 4 figures.
Each set includes the Rhino and Scorpion
in as well Green Glow as Blue Glow.
Set Price, all 4 figures; $20

Purchase directly via the LittleRubberGuys Store

Luckily the line is still alive and behind the scenes the creator of this line, Jon Karis, is working hard to hopefully come with more releases for this line in the future. But until then there now are these awesome GITD figures to enjoy.

The White Rabbit was lucky to receive a set of these GITD versions so here is a direct Review of these freshly new Rise of the Beasts figures straight away.

Receiving them was already a surprise on its own because even though it was known these were being created it´s still unexpected but the biggest surprise was the presence of the Blue Glow figures. All of us are probably familiar with the regular GITD figures and items around which in general are white or yellowish in color and which give a Green Glow in the dark. But these Blue Glow versions were new (and unknown?) but they are awesome! The glow they produce is very powerful and for some reason they seemed to hold their Glow much longer/stronger than the Green versions. At least this was the case during the photo-shoot that´s done for this post for which they´re held a few minutes in very bright daylight directly followed by placing them in the dark for the glow effect shots.

In the beginning it took a little while to fully activate the glow effect but once it was activated both glow colors really popped in which the Blue Glow version seemed to last longer. But again this has only been tested for a relatively short period of time. It´s unknown, at this point, how long they´ll last at night once they are fully loaded being exposed to daylight throughout the day. Once this has been tested it´ll be updated here.

The image above perfectly shows what you can expect from this GITD Rise of the Beasts set. In itself the figures in daylight look pretty plain and boring color wise but their awesome sculpts really come to live once the lights go off and they start to Glow!

Especially the claws of the Scorpion in the Blue Glow version really work well. It is as if you´re looking at a 3D X-Ray of this figure. A great figure to have fun with.

Glyos Compatible
And let´s not forget the Rise of the Beasts line is fully Glyos compatible meaning you can not only mix up Glow in the dark parts with the other GITD version or the normal Rise of the Beasts figures but also compose something completely new with other Glyos parts out there.

Reason enough to grab a GITD set yourself and if you are a Rise of the Beasts AND a GITD fan this is definitely the perfect match!

Concluding this little GITD Rise of the Beasts Release Review is rather simple because in the end the pictures speak for themselves. Despite the long-term inactivity the Rise of the Beasts line remains an awesome toy line and with these GITD versions they can now even be enjoyed in the dark, GREAT. But let´s hope more (different) Rise of the Beasts figures and items will come in the future!