It took a while before this interesting figure from the Beasts Remastered Project arrived at the Beastformers Dungeons but now it is here let´s do a proper Review on it.

INTRODUCTION
If you are curious to read more about this project check out the post from August 2019; Beasts Remastered Project which also contains an interview with the artist @thatcreativecat You can also check him out directly on Instagram for more information and progress footage on how this Bee has been created like this nice 3D animation of the head design (Sept. 2019).

Just for fun… I made a more hi res version of Rumble Bee's head 😉 Do you all like this version or the original version better? #beastformers #toysculpture #toydesign #ビーストフォーマー #80s #80stoys #toys #battlebeasts

Early in 2020 @thatcreativecat reached out to @neromorus for the production of the Bees. Resulting in the first test shot of the Bee that was shared by @neromorus via Instagram in March 2020;a

After this there still was some fine-tuning to be done and at the end of April 2020 the first limited run of 8 Purple and 8 Yellow Bees became available for pre-order. These limited runs sold out fast and a couple months later 20 Golden Bees became available as well.  All of these three colors were offered via @thatcreativecat exclusively on Instagram (apart from a few who´ve been backing his Kickstarter).

At the end of September 2020, after some serious delays, the 3 Bees (2 Purple + 1 Yellow) arrived at the Beastformers Dungeons resulting in this Review;

NOTE:
Due to the color of the Yellow Bee which didn´t do justice to all the details on this sculpt for this Review only the Purple Bees have been used. It is possible that on some pictures the Purple color looks more blueish which is caused by external variables but it are the same Purple figures. Sadly enough one of them arrived with a broken wing which is also something that will be discussed in this Review.

Time to take a better look at the figure; 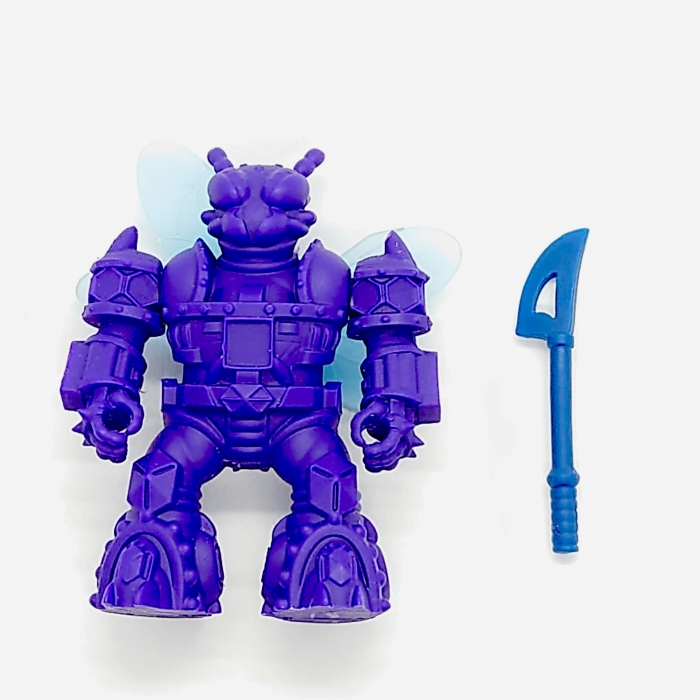 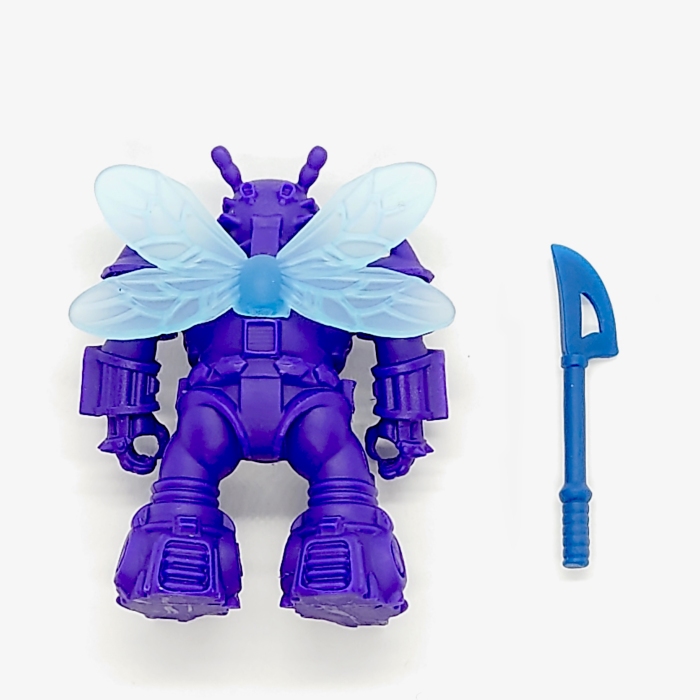 DESIGN 4.5/5
Sculpt wise this figure is honestly the first figure that deserves it to be called a 21st century Battle Beasts because it is clear that there´s gone a lot of thinking in to it while at the same time keeping the original Beasts in mind. Like the original Beasts there are a ton of tiny little details to be found on this figure which you´re unable to spot all at once which makes that even after you think you´ve checked it out it remains interesting. This is something the original Battle Beasts are known for as well.

It scores high on almost all levels because the choice for the animal is an interesting one, more about that later, but especially in the details it shows the craftsmanship of the artist. And another daring design choice has been made which even exceeds the designs of the originals!

Pros
++ True Battle Beasts feel (¨relatively simple¨ animal sculpt with a highly detailed armor)
++ Choosing a bug, which is definitely not the easiest to work with
++ Nicely detailed head sculpt that does give you a good idea of what Beast it represents
+ Overall proportions are really good and nicely balanced
+ Using the honeycomb shapes in the armor to express the animal reference even more
++ Stinger Weapon that goes nicely with the Beast
++ Compatible with original Battle Beasts weapons*
+++ Going with TRANSPARENT wings!

* Due to the closed hands the compatibility with other Battle Beasts weapons is limited to those weapons who have the handle at the bottom. For instance the weapon of the Rabbit or the ones from the Squid and Octopus can´t be held by Rumble Bee.

All in all this figure does come really close to the originals and it even has a  point that scores higher than the originals with the choice for the transparent wings which does give the whole figure a different feel. But at the same time there are a few cons that make the score for the Design a still more than well deserved 4.5 out of 5!

PRODUCTION 4/5
Production wise we´ve already become known to the high quality creations of Neromorus and this figure is no different. There is no doubt that the details from the design have been perfectly transferred into the actual produced version which is not always easy. And the purple body on it´s own despite it being a type of hard semi rigid plastic is pretty solid and doesn´t feel it´ll break easily. It´s obviously not as flexible as the original Beasts which have been made from a more rubbery material. Due to that this figure does also feel much more light in hand.

But there also are a few remarks in regards to the production/composition of this figure.
(Click on the images for large size) 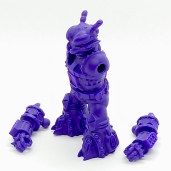 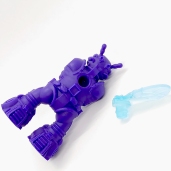 Sadly enough the wings, although made from a slightly more flexible material, are quite vulnerable. One of the Purple Bees arrived with a broken wing. This created the opportunity to try and pull the rest of the wings out to show you the connection but as you can see that wasn´t very successful either. It is therefore NOT advisable to try and remove the wings because there´s a big chance they´ll break. You can try to heat it up like the original Beasts but since the material is different it also reacts differently to heating and it didn´t really help when it came to removing the wings. The fact that the wings are attached to the figure directly after production also increased the risk of breaking wings because of the fact they´ve to be shipped as such. It´d have been better if the wings would have been packed with the figures loose, like the weapon, so they could´ve been attached later.  For the little weapon goes the same as the original Battle Beasts weapons, although it is slightly flexible, it remains a vulnerable piece that can easily break. 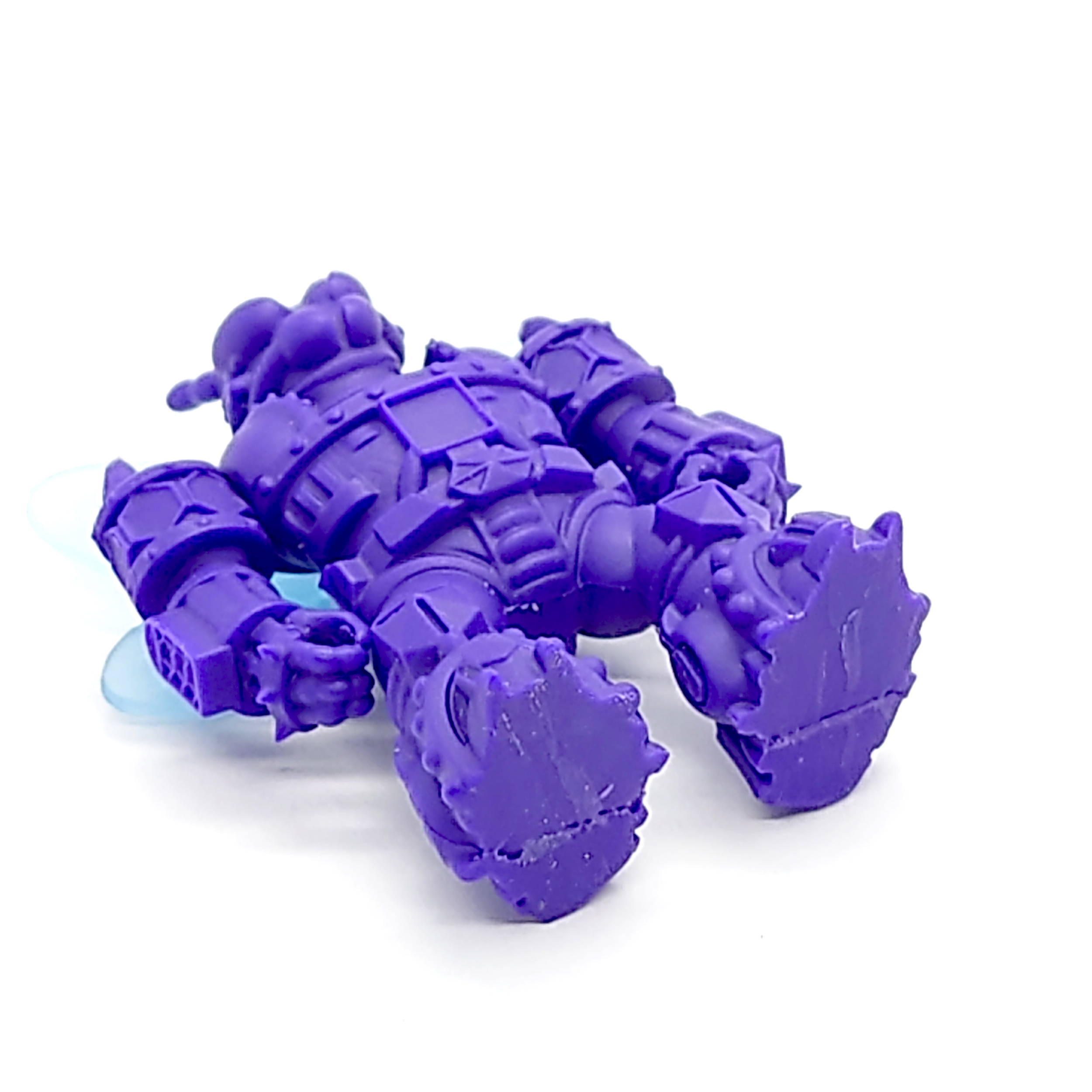 The bottom of the feet are the most sloppy from the whole figure. Not that this is a concern since it stands perfectly and solid without any problems which makes that it´s also a well balanced figure in that sense.

And although this is an obvious non original Battle Beasts it would have been nice if the figure would´ve been marked with a makers mark. Also to do justice to the artist and producer of this figure. 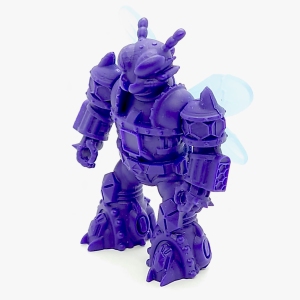 Overall another high quality figure by @neromorus but the choice to distribute the figures with the wings makes that this figure scores a 4 out of 5 for Production simply because it´s a key element that needs and deserves it to be handled with more care.

Rumble Bee is, as mentioned earlier, a great 21st century follow up of the 80´s original Battle Beasts because it checks a whole lot of the boxes that needed to be checked. Which as we´ve seen from earlier attempts, even by Tomy Takara, themselves with the Beast Saga line isn´t that easy.

And that Rumble Bee has the right to claim it´s position in the BB Community clearly shows when you place him in between the two other insects;

It clearly shows what the effect of the transparent wings is, imagine Flying Dragon and Kickback with transparent wings… Of course it´s a production difficulty but it could´ve made those awesome original figures even cooler for sure.

Guess next up is a solid paint pattern to make Rumble Bee stand out even more, looking forward to see what kind of creations will follow in the future!

Ending with a few outdoor shots which show you the true Purple color in a more honest way. 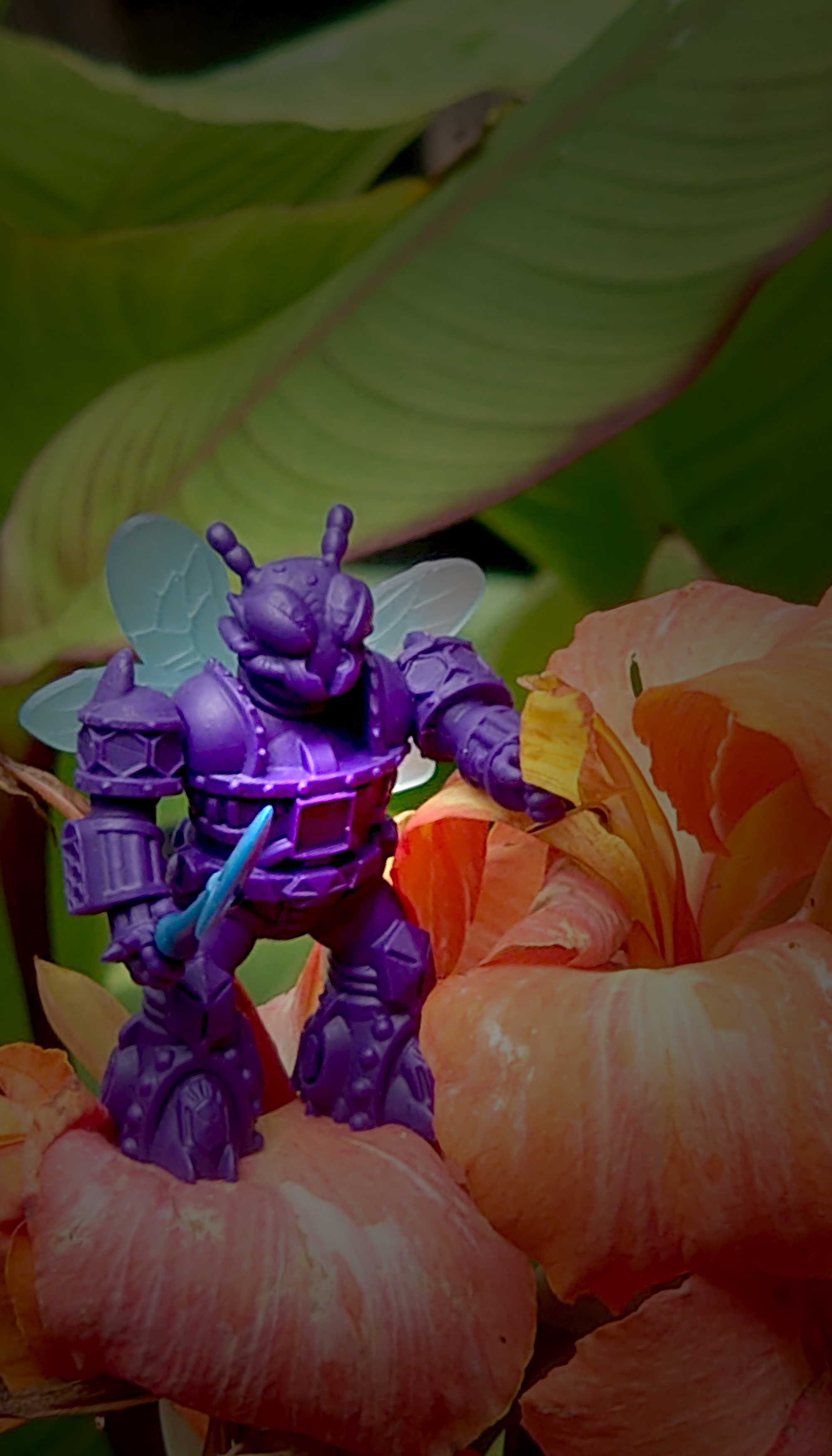 So far the Review of Rumble Bee, the first uniquely sculpted figure from the Beasts Remastered Project by @thatcreativecat that deserves it´s spot in the BB Community as 21st century Beast with an overall score of 4.5/5!