It might have been obvious already but the Rabbit has always been one of my special figures within the Battle Beasts line simply because it was my one and only BB figure that I had for a long period of time until the collecting virus came along. After my confrontation with the beautiful and colorful Greek Battle Beasts (GBB) I soon decided I wanted to see if it was possible to get all the available colors of the Rabbit, a so called “master set.” This sounded fun but I could not have expected this would become such a difficult, time spending and expensive journey.  This is how it went;

After or during my decision of building a GBB Rabbit master set (total of 8 colors) in the end of 2011 I managed to find a few big GBB sets that included the Silver, Metallic Blue and Purple Rabbits. This resulted in a quick start with 3/8 in possession within no time. And due to the fact that during that period the only focus was on the GBB Rabbits I used my connections and other cool GBB figs that came in those big lots I had purchased to trade myself the Black and Orange/Brown Rabbits with a similar speed. So within a month or so I had already 5/8 taken down. This went pretty easy and the costs were within limits as well while at the same time other collectors were helped with the trading options. Not much later I also traded myself a Green Rabbit which now, knowing the set is completed, can be seen as one of the best scores/finds within this whole journey although it looked and felt like and easy find at that moment. The status at the beginning of 2012 just a few months after I started this idea was 6/8 it went smooth and easy thanks to my connections and the luck I had with some nice other GBB figs in those lots which traded well but than it stopped. A Blue Rabbit did not show up and a Pink one seemed impossible to find since even a simple picture of it could not be found on the internet. The connections I had to get myself a Blue Rabbit and which I traced with the help of google all referred to discussion on online forums from years ago that seemed to have all died out so getting in touch with any of those related to this discussion was impossible but at least there was a picture of it. Later in 2012 a Blue Rabbit showed up for sale and I managed to purchase it right away. In the end I managed to purchase and trade more Blue Rabbits since I was not happy with the color match of the arms and body parts yet. In the end it was also the Blue Rabbit which was the last figure I completed in the way I wanted it so with the best possible color match just like all the other Rabbits needed to have a flawless color. After the Blue Rabbit 7/8 only the mystical Pink Rabbit was remaining and even after some hopeless shouts for it out on the internet there was no response to my request. And my fear to get stuck with my 7/8 status became more and more the case especially since all of my connections and fellow GBB collectors had never heard about or seen this figure before, so I was almost literally searching for a myth. After another ten thousand requests there was an unexpected response from a fellow collector who might be willing to trade his Pink Rabbit. Soon a picture of a flawless Pink Rabbit followed, it exists!! That was my first reaction as well as those from other fellow collectors who had been following my journey for a while. Now it was located, which took me months, it was the task to work out a trade but I soon became to realize that my clear and publicly shown interest had caused an extreme rise in collectors value of this figure as it felt like it had become worth its weight in gold looking at the trade value of it. But it was the Pink Rabbit so I needed to get it…….. The trade item the owner wanted was something I needed to trace down next since I was not able to offer that myself as it was a piece I did not own. Knowing the difficulty I had to find this Pink Rabbit tracing that item was pretty easy but of course the owner of that item was not willing to let go that easily either so he came up with another item he needed and so on. In the end there were four people involved in what had become a complex trade of a multitude of rare items including a rare drill, gumball figures and other rare Pink GBB figs. To get everyone this far and to find all of this took me almost 1,5 months but in the end I was able to get back to the owner of the Pink Rabbit telling him he was going to get the item he requested. Everything worked out well and in the end I did end up with my last gem the mystical Pink Rabbit in perfect condition. In Dec. 2012 I received him and I was able to complete and finalize my Greek Rabbit project, 8/8, after many deadlines had passed because in the end to goal which was set for Easter 2012 based on the quick start was clearly not a realistic deadline. It was a long but fun journey and thanks to this I developed and gained a huge knowledge of this GBB line which was only available in Greece and I completed my GBB Rabbit Master Set!

Support:  Although all the colors of Rabbits are found they are not all fully armed so there is still the need for some GBB Golden or Silver weapons.

Review:  Based on the whole project I always thought the Pink Rabbit as well as the Purple one were the most rare as this is a common situation amongst most of the GBB but in the end I managed to locate at least two of these while the Green Rabbit has never been shown ever since I managed to trade the one discussed above. So it looks like in the situation of the Rabbit this Green Rabbit might turn out to be the real gem within my collection. This is not a general thing amongst the GBB because like mentioned in most cases the Pink and Purple figs are the most rare and hard to find for many of the figures although there are exceptions. Every figure will have its own color that is hard to find for that specific one so it will always be a journey to get these. In general though it is fair to say Silver, Black and Metallic Blue are the more easy to find colors. Orange/Brown is a bit harder than those followed by Blue and Green. Purple seems to be the most difficult color to trace down just before Pink. In the end it fair to say that even though finding the Pink Rabbit was a difficult task I can tell I have been pretty lucky with finding the Purple Rabbit in a lot directly and that I was able to trade the Green Rabbit pretty easily. It took me almost 1,5 year to complete this project but it was worth all the effort because the pictures prove it is awesome to see all these colorful Rabbits lined up! 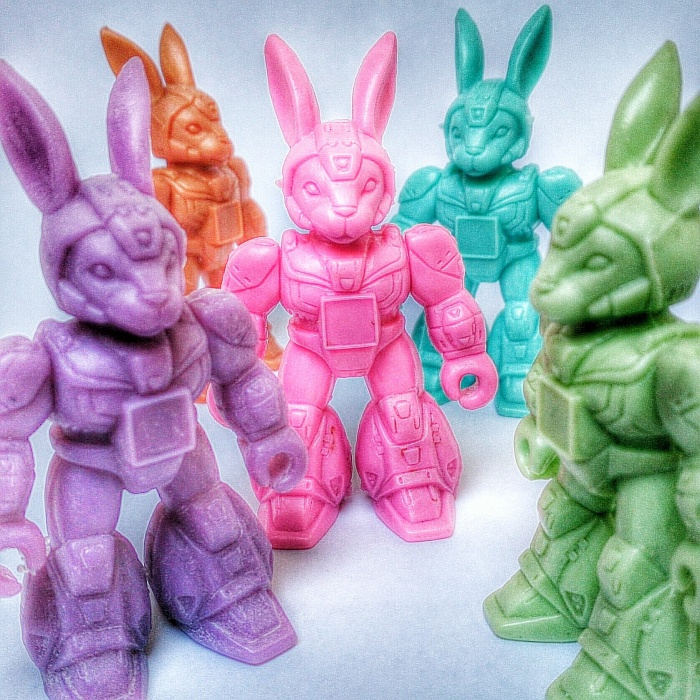 2 thoughts on “The Greek Rabbit Project ’12”