This might sound a bit weird because most of us BB collectors who´ve grown up during the 80´s and early 90´s of the last century still vividly remember listening tapes. But the new/younger generation probably has no clue since they´ve grown up with CD´s or only with MP3. Well kids a Cassette also called Compact Audio Cassette (CAC) was an analog magnetic tape recording format in the pre-CD era which allowed you to record and playback audio. It was HUGE in size compared to the audio devices known today and it could only hold up to a limited amount of time ranging from 30 min. to even 90 min. on EACH SIDE.

Because believe it or not you had two sides on a Cassette meaning you had to flip it halfway, a C60 Cassette for instance held 30 min. on each side. And you know what… you couldn´t even listen straight from the Cassette because it had to be inserted in a Cassette Deck or Walkman to be able to play it. There´s no skipping or whatever because the amount of functions were limited to; PLAY, PAUZE, FAST FORWARD or REWIND. That´s all and if you messed up or the deck or walkman screwed up you had to fix the whole Cassette manually… We´ve all been there at least if you date back to on of those ancient ages. It´s a tough time growing up back than BUT we did have Battle Beasts as kids!

So far the explanation, if you want to know more there´s GOOGLE, which is something we didn´t have back in the 80´s either…

In 2013 there´s a Topic going on on LittleRubberGuys.com about this Tape which had just sold via Ebay. A rare piece already at that time but it went for a low selling price, around $30, and a lot of the collectors complained about not taking a shot at it or forgot to bid. All in all the general consensus about it was the same because everyone was curious about what´s on it… With the BB Community being quite a live on LRG back than it only took a few days before the seller, buyer and someone with a transferring device were known.

Enough to get going you´d say but it turned out to be a bit more complicated but to keep a long story short it´s been a patience game for over a year until December 3rd of 2014 this post appeared on LRG;

Eric Koppen (koppenschevelle) was the legend who thanks to Zion808, for providing the tape, converted the Battle Beasts Cassette Tape into a 21st Century proof (at least for now) MP3 file.

Something that you can listen even on your contemporary device today!

Digitizing BB History is one of our main tasks so having the Audio of an old Cassette Tape from 1987 available for the BB Community is a great step in the preservation of our beloved toy line.

And good news for those who are not (yet) a member on LRG the audio file can also be listened on the Beastformers Blog now since a new page has just been added to the Battle Beasts section; 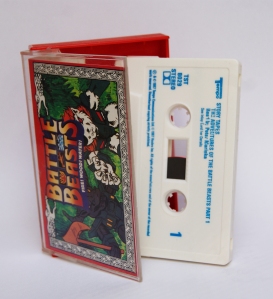 It is great to listen and it´ll probably evoke a lot of nostalgic feelings, great to listen on a rainy day or any day! On this tape there are two Stories (two sides of a tape) and like most of the promotion and advertisement in the UK during the BB release only the first 18 Beasts make their appearance. With the audio you really get a feel for the character that´s given to any specific Beast so if you´re not prepared to hear something unexpected about your favorite Beasts beware!

A great and fun piece of Battle Beasts history that is now read to be listened on the Beastformers Blog via the BB Cassette Tape page.

Special Thanks to Eric Koppen and Zion808 for preserving this unique piece of BB History!

Hope you´ll enjoy listening the audio file and see you back soon or… on the 22nd of next month!

It honestly has been a race against the clock for this post making it on time but a White Rabbit is always late. Late but on time to deliver yet another…

NEW Post/Page/Update on 22nd of the Month! 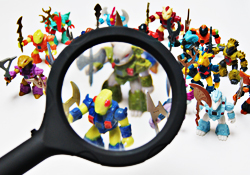