Experienced Battle Beasts collectors can tell, and new or beginning collectors will experience, that the step from Collecting Battle Beasts to Laser Beasts is not the most common or easy one. There are various reasons for that and on this page some of these are shared.

But before looking into this step of collecting Battle Beasts, for those who are interested in the Psychology of Collecting the Collecting page shown in the menu has finally been updated. It has been ¨UNDER CONSTRUCTION¨ since the Maintenance Period of 2015 so it´s about time. If you are curious about where this urge for collecting comes from and whether it´s a positive or a bad thing go check it out.

Where the Collecting page is a general article explaining the Psychology behind Collecting there´ll obviously also follow a specific page about Collecting Battle Beasts but that´s not completely finished yet. It´s scheduled to be finished before the end of May 2019 so keep checking back.

Before going into the main reason why the step from Battle Beasts to Laser Beasts might for some be a bridge to far it might be fun to share a little personal experience. Because believe it or not but The White Rabbit wasn´t very fond of the Laser Beasts in the beginning.

Back in 2010 or 2011 when The White Rabbit was still a rookie in the world of Battle Beasts collecting it had never seen a Laser Beasts in real life before. And for some reason this caused that the Laser Beasts were imagined as larger sized figures than the Battle Beasts. Don´t ask why, maybe it´s because of the Orb in their chest which gives them a slightly different scale if you´re completely focused on the size of the rubsign of the Battle Beasts, but in the mind of The White Rabbit it looked like this; 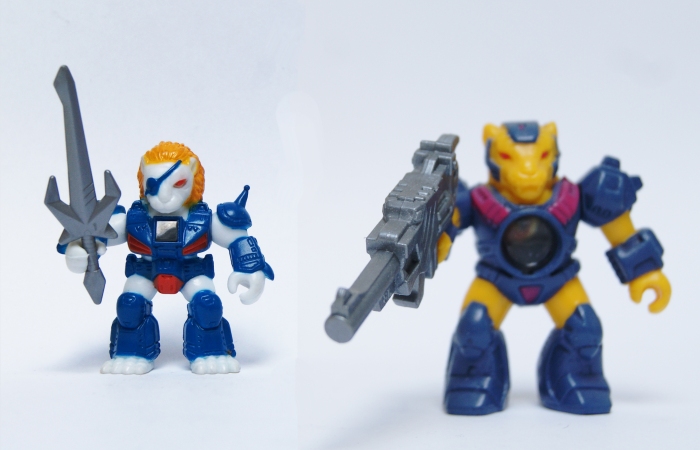 With the Laser Beasts being double the size of the Battle Beasts, again at that time The White Rabbit had not seen a Laser Beast in real life nor any solid size comparison shots.

Of course it didn´t take long before proper comparison shots were found due to the passion and interest for this whole line but even at that point, knowing they´re the same size the Laser Beasts looked/felt weird for some reason.

In some cases you just need to have a figure in hand to fall in love with it simply because pictures don´t do justice or they can give you a different feel. For months, building the first base of the Beastformers Collection step by step, the complete focus was on Battle Beasts and options to buy Laser Beasts were completely ignored. Until a certain moment when a Laser Beasts was acquired ¨by accident¨ as it was part of a larger lot of Battle Beasts.

Of course it was one of the so called ¨Low-end¨ Laser Beasts, namely Fly Sailor, but it didn´t matter because it was completely clear and unavoidable that they were part of the Battle Beasts family and for that reason alone they deserved their spot in the collection. At that moment the realization kicked in that they had to become part of the collection as well and even with the ¨limited¨ knowledge about them at that time it was clear this wasn´t going to be an easy task.

Was it such an alien initial thought that the Laser Beasts looked odd or is it something that might´ve been the case for more collectors? It could be because as a Europe based collector the chances of actually having memories to Laser Beasts were very limited knowing only they´re only released in a very limited amount of countries. So their distribution might definitely have played a role in that.

And sadly enough distribution is also the reason why Collecting Laser Beasts today is so hard because it´s the main reason why the 36 Laser Beasts are divided into 3 parts of 12 Beasts each. The Low-end (#77-88), Mid-end (#89-100) and the High-end (#101-112). It is a bit weird to split them up in such a way but there´s a reason for that because for many collectors world wide the High-end Laser Beasts must have been alien as well knowing they´re Japanese Exclusives.

Due to the fact that the final 12 Laser Beasts were ONLY available in Japan back in the days we´re now, as collectors, forced to deal with the consequences…

And the main and major consequence can be summarized with just one word… PRICE.
Before going into this a bit deeper it´s important to mention that ALL Battle Beasts and Laser Beasts related price guides out there are not accurate and that naming any prices is useless simply because the market for these figures is active and variable driven by supply and demand, like any other (collectable) market. With these figures being 30+ years old and collected by collectors all over the world it is not strange that time is another important factor to keep in mind because the more time passes the slighter the chances of finding the items that are already hard to find at the moment.

Although over the past period of roughly 6 to 12 months the prices for Battle Beasts have increased drastically the Laser Beasts prices have been relatively steady but history also showed that a part of those (new) collectors who are now after the Battle Beasts will make the step towards the Laser Beasts as well meaning there´ll be more collectors hunting for the same Beasts. And this can obviously cause problems with collectors who might become disappointed due to the fact they can no longer aim for certain figures simply because prices are out of reach.

To get an idea of where this congestion occurs the abstract chart below gives a good idea of the correlation between the different Series of Battle Beasts and the division of the Laser Beasts in the previously mentioned 3 parts; Low-end, Mid-end and High-end.

In this chart that´s an abstract representation based on the prices over the past decade it is clear that there are two points of concern. And it are exactly those two points where collectors often take their moment to contemplate and consider whether they go for the next step.

A difference of just one number but the gap between Laser Beast #88 and #89 is huge and a first sign of the effect of the earlier mentioned distribution of the Beasts. Because just like the Series 1 Battle Beasts who are relatively lower in price compared to the Series 3 due to the fact they´ve been released in larger numbers and over a wider variety of countries the Low-end Laser Beasts are relatively easy to obtain compared to the Mid-end and even High-end Laser Beasts. Sadly enough the difference in quantity of their release has been so big that where you´ve become used to the gradual increase of prices up to #88 there´s now for the first time a sudden (first) steep increase. This is the first point where collectors might decide to consider their collection done or take a break to contemplate whether or not it is wise to continue. Because it honestly is a serious step to make and with the time passing it´s one that´ll become even more tough.

And if the step isn´t hard enough already there are also some extra accessories that show up with the Mid-end Laser Beasts because all 12 have a Shield. The 6 from the Japanese Shield Battler set, who´ve also been available in some European countries and maybe even locally in the US for a very limited period of time as well, are the most known but the other 6 Shields are EU Exclusives and those were not even available in JAPAN! It is tough to decide what to do but you can always decide to go for just the figure alone.

Once the decision is made and you might decide or have decided to cross this line there´s a big chance you´ll go all the way towards the full 112 (76 Battle Beasts + 36 Laser Beasts) complete collection because even though there´s again a huge (second) steep increase crossing the Mid-end #100 to the High-end #101-112 history has shown that even though this might be the biggest gap to cross the major decision to go all the way has been made by crossing the first line starting with the Mid-end Laser Beasts.

The moment you enter the number of the Japanese Exclusive, or maybe even already during some of the Mid-ends, you´ll experience that the pond for fishing has become relatively small and whereas you might experiences some competition already before you´ve now become one of many hunting down one or more of the 12 final Laser Beasts. This journey can be challenging but even more frustrating because due to this there´s no price guide or collectors who´s able to tell you for how much the next Beast will go once it drops on the market.

Luckily not all of the 12 final Laser Beasts are appreciated as much by all collectors meaning you might be able to find, for instance one of the Monkeys (#104 ジーラモンキー Jeerer Monkey or #106 モンキーファイター Monkey-Fighter), relatively easy and for a price that´s comparable to some of the harder Mid-end Laser Beasts.

Auctions for the more rare complete High-end Laser Beasts in the past have reached insane prices simply because of the fact for some specific figures the pond has completely dried out and there are a lot of collectors aiming for it resulting in a bidding war.

With prices going out of control and the time in between the availability of rare Beasts increasing it also becomes questionable whether, and for how long, it´s realistic to actively pursue a complete collection.

As a collector and Battle Beasts ¨connoisseur¨ in the past a few collectors have reached out with the question to help them complete their collection aiming for the full set of 112 Beasts and although this has been successfully achieved twice it´s question that nowadays can no longer be answered positive.

The harsh reality of collecting this line today is that it´s simply become insanely difficult to find, even with a solid base of connections within the BB Community, complete Beasts in the higher number range. And although figures do show up every now and than the problem is that complete figures let alone loose laserguns are almost impossible to get. Even IF you have made the decision to chase them all down and did take that huge step crossing those two lines going for the Mid-end and High-end Beasts it´s not said you´ll ever get there. It´s sad but if you are a (beginning) collector of this line and hope to complete an all original set of all 112 figures over the next years it´s highly likely that it´ll turn into a disappointment. Sorry…

Of course you should never give up hope because it´s happened before that rare items suddenly become available, for example when another collector decides to sell his or her collection, but if the happens prepare for the worst or make sure you are on time because you won´t be alone!

This was the fifth post (5/22/2019) of the new ¨22 Project¨ dropping a new Post/Page/Update on the Beastformers Blog every 22nd of the Month in 2019. Explaining and sharing some experiences about a big step that many collectors made, won´t make or might make someday because Collecting Battle Beasts ain´t easy once you get hooked to the Laser Beasts…

Hope it´s been informative and it might help you to make the right decision now or in the future building your own Battle Beasts collection!

Again it´s been a just in time delivery by The White Rabbit, to be honest the Post wasn´t even completely finished once it was published, but in the end it´s here another…

NEW Post/Page/Update on 22nd of the Month!

One thought on “From Battle Beasts to Laser Beasts”