Welcome fellow collectors and Battle Beasts fans within this post The White Rabbit will clarify a bit more about the mysterious Golden Ticket campaign and here you´ll also find the Full and Detailed Instructions on how to WIN the GOLDEN TICKET!

This is an active post that will receive updates throughout the period that this Golden Ticket campaign runs so check back regularly to see if there is news or if certain links may have been activated… Enjoy!

Part 1 (1/3) of the #BeastformersBattleSpecial has dropped!

IF you have commented with the Correct Beast & Symbol you will enter the lucky draw round where the Golden Ticket Winner will be randomly selected.

WINNER Announcement will be exactly one week (24hrs after Part 3) after the #BeastformersBattleSpecial drop on Sunday March 17th. Winner will be tagged!

All of the above will take place on Instagram via @Beastformers

Almost 6 years have passed and although the amount of likes on the first post never changed the posts shared on the @Beastformers Instagram account since started to get more and more attention and the number of followers started to grow as well.

Currently The White Rabbit is balancing at the milestone amount of 1000 (1K) followers. A number that´s nothing special in the current Social Media driven world but it is quite a number for a very niche 80´s toy line. So for an Instagram account that is solely posting about Beasts it could be considered as quite a milestone. And although The White Rabbit does receive more than enough appreciation from the BB Community for all the work on the Beastformers Blog it is always nice to see that the growing numbers of followers show that the line is still more than alive!

For The White Rabbit and the Beastformers Team is not as much about the amount of followers on Social Media but more about the reach it brings in order to help and inform fellow collectors all over the world in order to preserve the Battle Beasts line in a good way for many years to come. But now that the 1K Followers are in sight it´s about time to think about a little fun campaign which wouldn´t just be your regular ¨Give Away¨ so in order to celebrate the 1K on Instagram there´s a special Golden Ticket contest! For which of course the 1000 followers have to be reached first so in case you´re not following yet this might be a good reason to do so in order to have a chance to WIN the GOLDEN TICKET!

This is what it is all about the GOLDEN TICKET

In history there´ve been various historical golden ticket events and also the Battle Beasts line had secret lucky draws embedded in several releases. Think about the special (Golden Hologram) cards in the Japanese single boxes but also the idea of completing the Stone Tablet with the two halves that could be obtained in order to get the Stone Cobra.

All fun events to look forward to as a collector and didn´t we all wish to be that one lucky kid to find one of those things back in the days…?

Although this Golden Ticket isn´t an access pass for a tour through the Beastformers Dungeons on Planet Beast (sorry) like the Charlie and the Chocolate Factory Golden Ticket it hopefully will be a lot of fun and worth the Battle with fellow collectors.

BUT before this mysterious Beastformers Golden Ticket Booth, that can only be accessed by the Winner with a correct Password, goes live EVERYONE can have a little sneak preview of which items (not all) will be available to pick from. For a limited period of 72hrs (3 days) after the official campaign has been launched it will be open to visit by clicking on the image below;

In the coming days, via Instagram, a little sneak preview of the items that will be available at the Golden Ticket Booth will be shared!

In order to keep this Golden Ticket campaign interesting to ALL BB Collectors the selection of items that can be found within the Golden Ticket Booth is as diverse as possible in the hope there´ll be interesting things to pick from for as well the beginning collectors as the more advanced collectors. Of course the value in points is addressed to each item accordingly.

Are you already curious to visit the Golden Ticket Booth?

Now that it is clear what you can win and what the Golden Ticket actually represents you might´ve become curious on HOW to WIN the GOLDEN TICKET?

First of all it´s important to mention that participating in this contest is completely FREE and that the eventual GOLDEN TICKET winner will have NO costs at all, also shipping wherever that might be World Wide is covered!

The only thing that is needed is the fact that you have to be a follower of The White Rabbit @Beastformers on Instagram, you can also still start following if you are not a follower yet, because that´ll be the only way to join in on the Battle. (Private Accounts are not allowed to enter)

Because a Battle it´ll be, obviously, a Battle for Fun!… and for a special little extra the:
GOLDEN TICKET!

One of the first hints given by The White Rabbit via Instagram was to start playing #BeastformersBattle on because some experience might be needed. This advice is still valid so try the Battle on the right or have a look at the 57 other different Battles that have been released already so far.

On @Beastformers a new #BeastformersBattle will drop EVERY Sunday!  So far the Battle between the Snakes (Battle 50: Triple Threat Snake vs King Cobra) has been the most successful one sop far but it might soon be forgotten when two special Beasts make their appearance for a #BeastformersBattleSpecial a Battle that will drop on the first Sunday after the milestone of 1000 (1K) Followers has been reached.

With the current amount of followers going back and forth between 995-996-997-998 and back to 995 to start all over again it looks like it might become a rat race but eventually it is also up to you, if you aren´t following The White Rabbit yet, in order to make it happen and decide when this Special Beastformers Battle will be dropped…

As mentioned two special Beasts will make their appearance and although most collectors can already tell which two Beasts they might be based on the silhouettes shown in this little sneak preview we all know that WON´T be the question. Because as with all #BeastformersBattles it will be up to you to decide which Beast and/or Symbol (in case of a tie) will be the winner.

This time it´ll be a little different though because the GOLDEN TICKET is on the line.

The original Battle Beasts rules from back in the days do apply meaning;

A little additional HINT is that one thing will be for sure and that´s the fact that none of the Beasts will accept a tie leaving 2 Beasts and 3 Symbols to pick, it´s up to you to select the right combination.

You enter, and have a chance to win the GOLDEN TICKET, by submitting your result (Beast & Symbol) in a comment directly below the #BeastformersBattleSpecial within 72hrs after the Special Battle has been dropped.

Unlike the other #BeastformersBattle were you are used to see the result by swiping to the left yourself that´s obviously not the case for this Special Battle. Because only the first part (consisting out of 3 parts) of the Battle will drop during the release and once the deadline to participate of 72hrs has expired the second part of the Battle, revealing the first Symbol, will be dropped. This will already rule out a certain number of participants because they might have chosen the first Beast of which the Symbol is released BUT with another Symbol meaning you no longer have the chance to win.

The final outcome and third part of the Battle will follow 72hrs later meaning that 144hrs after the release of the drop, and thus on a Saturday, the possible winners (the ones that had selected the correct Beast and correct Symbol) are known. Those who have made it this far, AND participated on time, will all be tagged once the third part of the #BeastformersBattleSpecial is dropped meaning they´ll be notified about their special achievement so far.

Out of those winners the final lucky winner, the one that will receive the GOLDEN TICKET, is randomly selected and this will be shared via Instagram (winner will be tagged) on @Beastformers 24hrs later on Sunday. At this moment also the exact Value in Points of the Golden Ticket will be revealed.

The winner will be contacted via Instagram DM and has 24hrs to make him or herself known in order to receive the GOLDEN TICKET via email including the crucial Password to enter the GOLDEN TICKET BOOTH. Within maximum 48hrs, after receiving the Golden Ticket, the selection of items picked from the Golden Ticket Booth has to be communicated and confirmed via email based on the maximum amount of points on the ticket.

IF for some reason the winner does not reach out within 24hrs after the final winner reveal The White Rabbits holds the full rights to call out a new winner, which will be selected out of the remaining winners (those who had the correct Beast and Symbol as well). In that case the original final winner reveal will be deleted on Instagram and a new post will be created with a newly tagged winner. This process can repeat itself as long as needed.

The first Sunday after 1000 (1K) Followers has been reached on the @Beastformers Instagram account.
Potentially this could be March 10th 2019 but it can also take longer…Time wise the #BeastformersBattle are know to drop randomly on a full hour on Sunday this will remain the case for the #BeastformersBattleSpecial Once dropped the exact moment obviously becomes crucial based on the connected reveals which will have place exactly every 72 hrs later.

On the @Beastformers Instagram account!
This whole event will take place Exclusively on Instagram so leaving a comment here or anywhere else (also NO Instagram DM´s) other than directly below the #BeastformersBattleSpecial means you are not participating! As soon as the 1000 (1K) Followers are reached and it is clear which Sunday the Special Battle will get dropped exact dates of the various reveal phases can be filled in and will be shared out here at the beginning of this post. 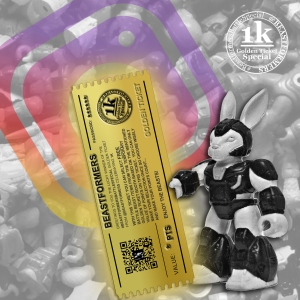 WHY? To celebrate the 1K followers on Instagram
WHAT? A GOLDEN TICKET can be won that allows you to shop FREE BB items from the Temporary Beastformers Golden Ticket Booth based on a maximum amount of Points

HOW TO WIN? You can win this Golden Ticket by participating by leaving a comment (Beast & Symbol) under the #BeastformersBattleSpecial of The White Rabbit on Instagram @Beastformers within the mentioned period.

WHEN? First Sunday after the 1K Followers has been reached.

WHO? All followers of @Beastformers (except Private Accounts) are free to enter.

Now that all of this is explained most of the questions should´ve been answered in regards to this Golden Ticket contest in order to celebrate the 1K on the @Beastformers Instagram account, only one crucial question remains;

WHO WILL WIN THE GOLDEN TICKET?

2 thoughts on “The Golden Ticket (Ended)”