Sharks, Snakes, Carps, Elephants, Tigers, Penguins and numerous other awesome sculpts are part of the Battle Beasts line and for some collectors owning just one of these figures is not enough and they start building an army with multiples of one figure. Army building is a known ¨virus¨ within the collecting community and it also happens amongst other toy lines but within the Battle Beasts community out on Instagram the ¨Army building virus¨ has been highly infective lately with more and more armies being built and pictures being shared. So it looks like there´s a new hype going on that can´t be ignored.

Together with fellow collectors and friends from Instagram we decided to join forces and came with one general hashtag that should show all the Battle Beasts armies in an instant; #BeastformersArmy 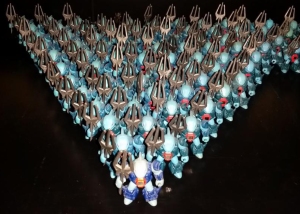 1st Battle Beasts Army
But of course this Battle Beasts army virus is not something new because armies with these little fellows have been built for many years now, and some armies are being built during several years and some are even ongoing, and probably one of the first people who started building an army with one particular Battle Beasts figure was Roland. He decided to start with an army of Sawtooth Sharks over 10-15 years or so ago and the army grew in numbers over time resulting in a total of around 60+ sharks.

Sadly enough Roland, who had one of the largest Battle Beasts collections known, stopped collecting and sold the biggest part of his collection. But luckily for us he was able to sell a big part of it to one person known as ShadowBat an active Battle Beasts collector on LRG meaning Roland´s collection lives on and didn´t disappear out of sight. He also purchased the Shark army and it is still growing in numbers!

Largest Battle Beasts Army
If we´ll look into one of the biggest Battle Beasts Armies known to exist there´s no way we can ignore the Snake Army from Eric Koppen which counts 160+ Snakes and it is still growing in numbers! Apart from having a complete army out of Triple Threat Snakes original Battle Beasts figures Eric also added bootlegs and custom Beasts that are based upon or inspired by the Snake Sculpt. The Snake Army is running for more than 10 years now and let´s hope it will continue to grown in numbers because it is one of the most impressive armies out there. 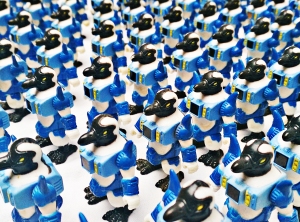 Beastformers Armies
In 2011 the first Army building project on the Beastformers Blog stated with a not very obvious and easy to obtain figure, the Penguin. Under the name of the PPA (Pugnacious Penguin Army/Alliance) the army of Penguins grew in numbers rapidly during the first years resulting in a total of 60-70 Penguins in total recruits that came from all over the world and which became also known under the name of Cold Feet Soldiers. Currently the Army of Penguins exists out of 80+ figures and new recruits are still added once in a while which makes the PPA an ongoing army building project that´s already lasting 5 years. 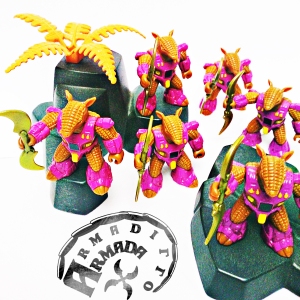 Armadillo Armada
With the current hype of Battle Beasts armies being built and the PPA being well underway the idea came to start a new army building project for 2016. With the Armadillo figure being high on the list of personal favorites and the fact there were already a few in my possession the choice wasn´t to hard. Although it was just a thought, which was shared via IG as a picture of a couple of Armadillos, the reactions and support to this came almost instantly. With the picture a new hashtag was introduced and this was picked up very quickly amongst the fellow Battle Beasts army builders resulting in this promotion for the #BeastfomersArmy So the Armadillos can be held responsible for this extra boost but like most armies being built they needed to have a name….. Names like Armadillo Army or Armadillo Alliance would have been to obvious and to easy so the new army building project on the Beastformers Blog for 2016 will go under the name of Armadillo Armada! And were the PPA never got a real original logo, since the original artwork of the Battle Beasts penguin was used, the Armada of Armadillos will also get its own logo. Later on there will also be a special page created for them under the Projects header out here on the blog but for now it´ll stay with this short announcement and the first picture of the Armadillo Armada and their own logo!

Interesting facts when it comes to Battle Beasts army building
As shown and mentioned above there are enough figures to pick from when it comes to army building with Battle Beasts but in most cases people tend to go with Series 1 figures. The reason for this is the simple fact that those figures have been available over a longer period and in more countries meaning they´re, in general, relatively easy to find and in most cases not to expensive. This last part is an important thing to keep in mind when you decide to built your own army with a certain budget because if you´re planning to go up to serious numbers of Beasts every buck more you´ll be spending on a single figure can become quite costly in the grand total. Here one of the dangers of army building is touched right away because even though most of the figures are still available in large numbers the way you decide to hunt on them for your army can directly influence the value of them meaning you´re almost solely responsible for the fact the prices of the Beasts you´re after might go up during, and because of, your hunt. When building the PPA almost all Penguins listed and sold were taken down right away because of the fact there was a direct demand for Penguins. But in time this caused not only that less Penguins showed up, simply because I purchased them all, but the ones that did show up also were priced higher than the ones before. The first Penguins purchased within the PPA project might´ve been $15 but in the end we´re looking at prices of over $30 each in some cases! Series 3 and 2 figures might be more affected by this way of army building because of their limited numbers and the simply rule of supply and demand but even during the period Roland started building his Shark army the Sharks were less easy to find and the prices went up as well. So when you are building, or plan to built, an army it is wise not to go to extreme and start buying out each and every figure you see because the more numbers of Beasts you add to the army the more there´s a chance you´re solely influencing the market resulting in the fact you´re responsible for the higher prices. And that means you´ll also have to spend more on them in order to get more figures added…..

Some sculpts have the advantage, like Eric had with his army of Snakes, that several bootlegs like Greek Battle Beasts have been made as well this means you can also start looking into adding the 8 colors of Greek figures to your collection in order to expand your army even further and give it a colorful touch. For more info about the Greek Battle Beasts visit the Τερατομαχους page.

Other Battle Beasts armies on Instagram!
Besided the armies of Battle Beasts discussed above there´s a whole lot more armies being built at the moment so here´s a couple of interesting armies which you can find on Instagram via #BeastformersAry or by following the particular collectors directly via Instagram.

Keep an eye out on those growing armies and start following the fellow collectors who share pics of them via Instagram or use #BeastformersArmy to find them!

Battles fought for Fun between the armies via Instagram
It´s probably been a year or more ago that the accounts of @Beastformers @Eric_koppen and @H23_toys fought out a Battle between their armies. There was a class between Gators and the Penguins that escalated very quickly in a serious Battle resulting in horrific footage. Luckily the Snake Army showed up an after various meetings there was an agreement and peace on Planet Beast was resorted. Sadly enough @H23_toys changed/deleted his account so a big chunk of the whole story is history but if you look and dig into the accounts of the two other armies being involved you can still find traces of this Battle that was held for Fun. And in order to spare you some scrolling through Instagram history here are a couple of images from the side of the PPA: 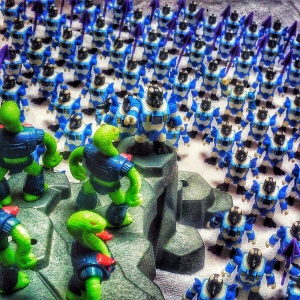 A picture that shows the visit of soldiers from the Snake army to the PPA in order to discuss how the peace could be restored on Planet Beasts. The negotiations seemed to take forever because during this period the Battle continued resulting in some horrific actions the PPA was forced into by the Green Gator Gang and the White Paw Platoon who showed up as extra support for the Gators to deal with the extreme cold.

Since there was no way to deal with the Gators as they seemed to handle like complete fools and without reason the PPA took harsh measures resulting in the fact that one of the captured Gators was locked up complete frozen in a big ice cube……..

This last image shows that eventually also one of the mean Penguins was caught together with a member of the White Paw Platoon both were captured by the PPA and they´re imprisoned inside an ice jail for as longs as needed. In the end every army involved cooled down, also literally, and there was an agreement that restored the peace on Planet Beasts.

Projects like these Instagram Battles are pretty neat because even though the armies might be far apart it feels like everyone who contributes in the storyline is writing an own chapter within the whole story because each individual will add another dimension or chapter by placing a new picture. And its up to the others involved to answer to that picture with another picture and that´s how the story comes to live.

Future Instagram Battles!?
With the ongoing growth of armies out on IG its likely that something similar might happen in the future but in order to do that its important to think of a couple of things. Because once you trade or sell all the Battle Beasts helping out the other army builder with the figs needed you exclude the possibility of taking part in this event since you´d need at least one or more figures from the other armies in order to get a dialogue going in the picture. Of course you´ll always represent the whole storyline from your position meaning you´ll have your own army fully present and available in most of the shots but without the soldiers of other armies showing in those pics its hard to connect the story together. So if you´re planning to start of join in such a project in the future keep in mind to hold back a couple of figs from the other armies.

Another tip might be the usage of a specific composed hashtag so that its easy to get the story, with the pics from all the various accounts, loaded all at once via one simple hashtag.

Hopefully we´ll see these armies evolve over time and who knows what other armies we might welcome to the Battlefields. See you out on Instagram!

One thought on “Army Building #BeastformersArmy”