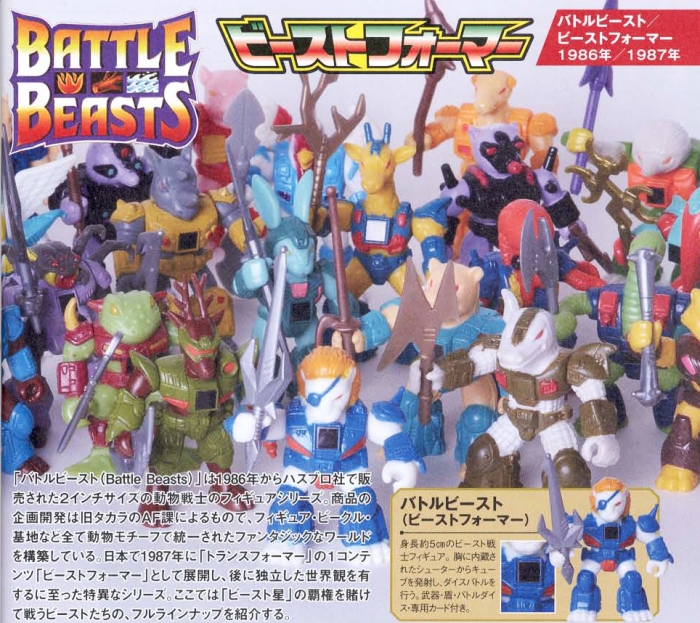 Credits to
– WhiteLeo –
for the translations

On Page 26 (part of the page shown on image left) within the Takara SF Land Evolution (2017) book the first ビーストフォーマー (Beastformers) content can be found, in total the book holds 8 pages (P26-P33) with info about this line. This includes a small segment of レーザービースト (Laser Beast) which can be found on page 31 and page 33.

As a Battle Beasts fan there are probably a couple of things that jump straight into the eye seeing the Beasts but first let´s have a look at the translation (image above, text left side, part of P26);

“Battle Beasts” are a series of 2-inch animal warrior figures sold by Hasbro since 1986. The planning and development of this product are based on the former AF Section of Takara, which built the fantastic world which is unified by all the animal motifs of the figures, vehicles, and bases. A unique series was developed in Japan in 1987 as the content of “Transformers” called “Beastformers” and later was viewed independent worldwide.

Not a lot of news for us as BB fans in this line although there are a couple of remarkable things of which the first words directly jump into the eye; 「バトルビースト（Battle Beasts) 」This was the name that Hasbro addressed to this line and it has never, during the BB era, been officially used within Japan since within the Land of the Beasts they´re always known under the original name; 「ビーストフォーマー」（Beastformers). What is meant with the former AF Section of Takara here is not completely clear. In this line the independent release between the Beastformers and Transformers world wide is once more confirmed whereas in Japan they´re launched as part of the Transformers line.

Translation of the text in the text-box (image above, text in text-box right side, part of P26)

Battle Beasts (Beastformers)
The Beast warrior figures are about 5cm tall. Cubes are launched from the chest shooter and battle dice are rolled.

This is one parts causing a lot of frustration amongst Japanese Beastformers fans, and those who can read Japanese, because it is obvious something went completely wrong here. Probably a mistake in the edit causing a part of the text that´s supposed to go under the Beast Saga header ending up here. Most likely the text-box was supposed to contain info regarding the so called ¨rubsigns¨ or heath activated stickers showing the symbol (Fire, Wood, Water) of the Beasts.

Now let´s have a look at the image itself because even there are a couple of notes to place. With the world wide Battle Beasts Logo showing, and the earlier mentioned Battle Beasts name converted into Japanese, it is clear Takara Tomy wanted to express the world wide and international character of the line. With that in mind it makes sense that #47 Hunchback Camel is shown even though it was one of the two Beasts which, for some reason, was never actually available in Japan.
(Beastformers Stories: A Mysterious Truth… 2 Unreleased Battle Beasts in Japan (?)) 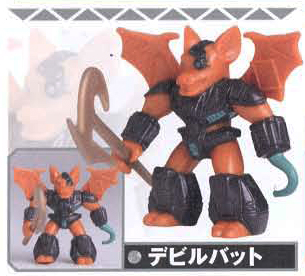 What might be a bit frustrating to see, and which sadly enough incidentally continues over the next view pages ( like image left, showing デビルバット (Devil Bat), P27 / image below, showing ポーラバトルベア (Polar Battle Bear), P29), is the fact that Gruesome Gator does not have its rusbsign anymore. It is a bit sad to see that now they finally put a publication out there about the Beastformers line there are imperfections like this showing. A bit more effort and they could have easily gathered the figures needed with the rubsigns still attached, they even could´ve asked since the Beastformers Team would´ve gladly helped them out for a publication like this. On the other hand it is understandable some figures show up without their rubsign because as we all now this can happen over time and these figures probably came out of an archive/storage space from Takara.

The short introduction of the Beasts on the top of page 26 (image above, main image) is directly followed by a complete overview of ALL 76 Beasts within the line showing each Battle Beast individually, 3 in a row (image below, part of P29). In total this takes up 5 complete pages (P26-P31) out of the 8 pages in total… And considering the International character they tried to show in the introduction part adding the English names of the Beasts to the Japanese ones could have made sense.

Apart from these slight details which might be a bit of a frustration to some it is always nice to see a good overview of all Beasts. Due to the space required to show the Battle Beasts (5 pages) there was not a whole lot space left (?!) for the rest although it is doubtful whether they still had all the Laser Beasts around for this publication as well considering their very limited presence. 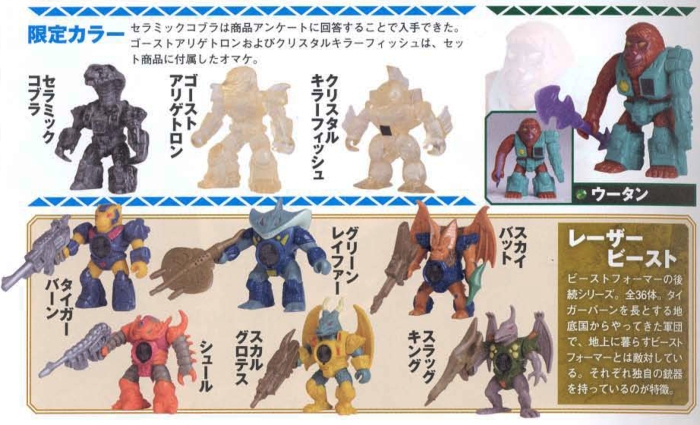 The so called ¨Premium¨ or in this case 限定カラー (Limited Color) Battle Beasts (Stone Cobra, Clear Gator and Clear Carp) are also briefly discussed here is the translation of that part (image right, text above Premium figures, part of P31)

Not a lot of news, Clear Gator is missing it´s rubsign as well, on this level although it is remarkable they address the Cobra as Ceramic?! Amongst the International BB Community it is obviously known under the name Stone Cobra but this was also its name in Japan considering the text on the supportive letter that was received with the figure as part of the mail away offer; 石にされた特製コブランダー (Special Stone Cobranda). Credit: Forming the Beast (Stone Cobra | Mail-Away Promotion | Letter).  Looks like someone was able to remember this Special Cobra had a certain name but instead of coming up with Stone it turned out to be Ceramic in this case.

Followed by a very brief summary of the レーザービースト (Laser Beasts) (image above, text-box right side, part of P31)

Laserbeasts
Beastformers series successor. Overall 36 figures. The army from the Underground Country lead by Tiger Burn, and the hostile Beastformers who live above ground. They are characterized by having their own firearms.

¨Army from the Underground Country¨ it might have been this name together with the orb element that might have resulted in their American name: Shadow Warriors. It is slightly remarkable that for the majority of the BB Community these are always referred to as Laser Beasts, their original Japanese name, while the original Japanese name for the Battle Beasts, Beastformers, is less used or even known. Together, the English name of the Beastformers, Battle Beasts and, the Japanese, Laser Beasts instead of the Shadow Warriors seem to make the most sense which is probably why it was adopted by the BB Community as such. Also their limited release and promotion, of the actual name, outside Japan might have had something to do with it. With that in mind and knowing that the so called ¨high-end¨ 12 Laser Beasts (#101-112) were Japanese exclusives it´s a bit sad to see there´s not more information about them in this publication. 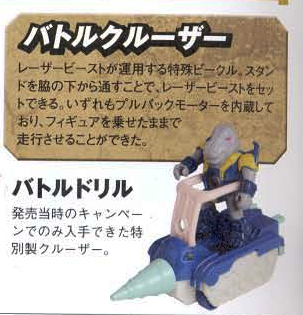 Supported by a text-box which translates as follows (image right, text-box, part of P33)

Followed by a line about the Laser Beast Drill (image right, text under text-box, part of P33)

Battle Drill
A special made cruiser which became available at the time of the release of the campaign.

As mentioned before the Laser Beasts are discussed very briefly so these additions are in line with that, for us as part of the BB Community they don´t add a whole lot of value other than confirming that what´s already known.

Before making up a final conclusion it is important to add that the final pages of the book (P98-P11), which are full text, seem to hold a couple of references to the Beastformers so let´s hope this will result in some more (valuable) insights and or information that was unknown. The Beastformers Team is still working on the translation of that part but as soon as there are any results it will be updated here!

To be continued…… hopefully!

–
Due to copyright issues the Beastformers Team decided not to publish all the content,
only a selective part of the Beastformers pages within the book have been shared,
in order to share just enough info, insights and details needed.
It is strongly recommended to try and get a copy of this book in case you prefer to see the missing parts.
–